What does a Critical Care Allocator actually do? After all, there are only three Critical Care Teams and a transfer aircraft to deploy?

This question is best answered as I did to one of our pilots; he sat looking over my shoulder at a screen full of 999 calls from all across Wales and said “So how do you know which calls to send us to?” My reply was “You look at the calls”. Slightly shocked – he replied “What, ALL of them?” and then gave a comparison with people who know no better suggesting that there isn’t really much to flying a helicopter – “It’s only two sticks….”.

That is exactly what we do.

Allocators work on a dedicated Air Support Desk (ASD) based at the Welsh Ambulance Service contact centre in Cwmbran. Funded by the Wales Air Ambulance (WAA) Charity, it is operational 8am to 8pm, coinciding with the EMRTS Cymru/WAA service. Each ASD shift has one Allocator and one Critical Care Practitioner (an EMRTS Cymru medic who also undertakes clinical shifts in the air and on the road).

A variety of clues will point us to those where early Critical Care intervention will potentially improve the outcome. One example could be an unconscious and entrapped victim in a road traffic collision who might require blood transfusion, urgent pre-hospital anaesthesia and conveyance to a neurosurgical centre. Less obvious, perhaps less dramatic in appearance, but with the potential nevertheless to prevent life-changing and debilitating long-term affects might be someone who has taken a simple fall climbing over a fence. They are conscious and breathing, the injury is to their lower leg. Not at first glance one for Critical Care? On closer interrogation though, the injury is actually an open fracture where the patient’s leg is badly deformed and their foot is pulseless. A Critical Care Team will be able to administer antibiotics to offset the risk from the open fracture and give advanced analgesia and procedural sedation to allow the limb to be straightened and circulation restored. All of this undertaken at the scene before the patient is even conveyed to hospital, thus greatly enhancing the prospects for a full recovery.

Identifying the call is only the start. The dispatch process involves alerting the appropriate team with relevant information. With an air response it is simply the grid reference, by road it is a postcode. For an air response, although the Pilot and team will decide on a landing site once overhead, there are often precautions to take. This includes alerting the Police and others at scene that a helicopter is responding, giving safety advice to civilians on the ground (particularly if the helicopter will be first on scene), and advising other agencies of dispatch to avoid “confliction” (with other aircraft such as Search and Rescue who might be in the area). At times, it might be necessary to arrange for the team to be met at a landing site and conveyed to the scene, or we might need to arrange an emergency road closure to allow a carriageway landing.

During the mission we record timings, called over the air by the teams, arrange logistical support both at scene and at the receiving hospital as appropriate, and conference call medical teams on scene with receiving hospitals and sometimes the Top Cover Consultant to advise of, or decide upon, appropriate treatment and disposition. We might, of course, have all our aircraft at separate concurrent incidents or occasionally the same one.

For me personally, it is a privilege to work on this desk knowing that we are part of a small team that makes a real difference to people’s lives. Despite being a long-serving and very experienced Control Officer when I joined the team, I have learnt more in these three years than at almost any time in the preceding 30, and that continues on a daily basis. Every day is different and new challenges arise to keep us constantly on our toes. 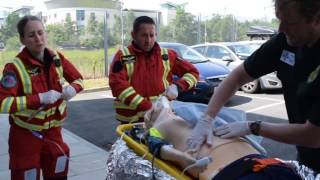